I seek the one who speaks
on loose leafs and cooch leaks
not for grief but sneak peek
at the what the future holds
before it unfolds
make diamonds out of coals
make music to steal souls
The next few years conquering fears
and planning moves
cuz I don’t plan to lose
life on a world tour
makin a world of less war
composing venomous flows
for throws on those
who would oppose
teach em proper respect
for the Epidemik Effect
after dues are paid
enter a new phase
feel the sun rays
watch my sons play
in the end all that I’m after
is a life of rhyme and laughter
now I’m no pastor
but in life,
you choose your path or
you choose disaster
make concious decisions
rise above the derision
with eyes that see my vision
to reflect and recreate with precision
the parts the resonate with your mission
I got a plan though
but to reach the next plateau
I gotta havvve a liitlle help from my friends ( theme to the wonder years)
we’ll rise so fast that we get the bends…

You hear so much about emissions… I think global warming has less to do with the car, and our emissions, than the concrete in the roads it’s on..look at how much concrete there is, and how far it goes,

This is an aerial photo of Chicago, from Wikipedia. I really made this observation personally when looking at Google Earth of Philadelphia, and out to Centre County and State College, a place I always thought to be completely dominated by forest. All the way out to the Midwest, St Louis, Missouri, no real patches of trees, except in some places in Appalachia.
all the farms,
all the housing developments
that 100, 200 years ago, were solar energy absorbing, CO2 converting, life giving oxygen TREES…

there isn’t much left in the way of forests…
< This has an measured, and well known effect on the climate,
a long documented phenomenon..
an extreme example of which is the Dust Bowl.

“The Dust Bowl, or the dirty thirties, was a period of severe dust storms causing major ecological and agricultural damage to American and Canadian prairie lands from 1930 to 1936 (in some areas until 1940), caused by severe drought coupled with decades of extensive farming without crop rotation or other techniques to prevent erosion. It was a man-made disaster caused by an abnormally severe drought combined with the deep plowing of the virgin topsoil of the Great Plains, which killed the natural grasses. Such grasses normally kept the soil in place and moisture trapped, even during periods of drought and high winds.
During the drought of the 1930s, with the grasses destroyed, the soil dried, turned to dust, and blew away eastwards and southwards in large dark clouds. At times the clouds blackened the sky, reaching all the way to East Coast cities such as New York and Washington, D.C. Much of the soil ended up deposited in the Atlantic Ocean. The Dust Bowl affected 100,000,000 acres (400,000 km2), centered on the panhandles of Texas and Oklahoma, and adjacent parts of New Mexico, Colorado, and Kansas.[1]
The storms of the Dust Bowl were given names such as Black Blizzard and Black Roller because visibility was reduced to a few feet (around a meter). The Dust Bowl was an ecological and human disaster. It was caused by misuse of land and years of sustained drought. Millions of acres (hectares) of farmland became useless, and hundreds of thousands of people were forced to leave their homes. Degradation of dry lands claimed peoples’ cultural heritage and livelihoods. Hundreds of thousands of families from the Dust Bowl (often known as “Okies”, since so many came from Oklahoma) traveled to California and other states, where they found conditions little better than those they had left. Owning no land, many traveled from farm to farm picking fruit and other crops at starvation wages. John Steinbeck later wrote the classic Pulitzer Prize-winning novel The Grapes of Wrath and also Of Mice and Men about such people.”
Wikipedia.

when I think about stuff like that, and weather systems destabilizing…and though I still watched some of the Vice Presidential debate, but I think, is the best thing I could be doing with my time, listening to what Sarah Palin’s memorized answer was to global warming? She clearly had nothing to say on that issue, though I am certainly glad she got a raise for the people of Alaska from the oil companies in exchange for the oil they pull out of the state. However, getting income directly from oil makes it hard for you see any other forms of energy as viable. I doubt she knows anything but oil. There is the possibility of her becoming President, and she has to quote another’s talking points, unreferenced, because she had no personal opinion on the subject, it never having really crossed her mind, and it will come to be a defining issue of the time.  Un acceptable, and that was an unacceptable pick for Vice President… in how we pass from a time of crisis, to the vision we have of the future. We must now talk about what we must do going forward, and we must have a new way of seeing, presenting information to the American people, to allow them to easily access the information about what’s going on

“Just the facts, m’am.”
Our government talks in vague generalities, without much in the way of facts, figures,, or even the most basic of Power Point presentation for YEARS about what should be done, instead of making like Nike

Some things are just silly, like arguing over whether or not you should talk with your enemy..

Talk to your enemy, hell yes, you need to be talking to everybody.. I’m on the ball court, there’s people talking trash, trying to find a way to beat me… but I talk to ’em, let ’em know what’s going to happen, and sometimes they make it true. On the free throw line, “Too bad you missed,” as they shoot- clank!

It’s a lot harder to want to harm someone you talk to, even if you don’t like them. Though scowls abound because of different values and ideologies, Seinfeld and Newman never actually come to blows. 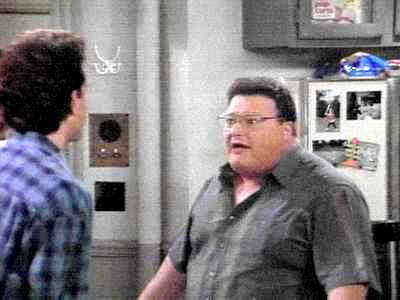 It’s not like we don’t carry the big stick, nobody wants it with us, nobody. If we want to destroy something, it’s done.

We have more weapons, more money, and real, real explosive power, deployable any place on the planet…enough to annhilate all life in any number of ways…. but, as it turns out, most of the time that’s not strictly necessary.. ( see world weapons situation for more specifics.)…. for starters we are really, really, far away, and anything anyone can do to us from that distance, we can do better (or worse, as the case may be) I don’t think there is a country on the planet that would argue our military superiority, and that is always with us when we sit down to the negotiating table, so any sort of harm to our people would be out of the question. I think if we spend less on arming other countries, we’ll get to spend less on arming ourselves…

I don’t advocate decreasing the size of the military; in fact, I think we create the highest level of combat and emergency readiness this country has ever seen, by deploying large scale missions, with units from all to be determined by where you went to high school, with everyone who entered the program in all years… for me all Bridgeton High Bulldogs from the 40’s till the 2000’s from high school on, maybe we should get some Israeli instructors to help us design them, since they already have experience in crisis management, and that will help to move us away from military aid.
Basically I was thinking of a giant laser tag like mission, with objectives, and training, twice a year… call dibs on a desert mission, and a forested terrain mission. Some people go to battle, some go to supply.
Like I said I want to test myself in the desert, tear you down and build you back up again.

To the type of content that goes on here… I’ll leave the trail of history, and some will appreciate the look at a different aspect